If you’re the kind of person who has the means to appreciate the finer things in life, then you should absolutely invest in an original Eames chair and ottoman. But let’s be real, not everyone has the budget to drop a few thousand dollars on a piece of furniture. That’s where the replicas come in.

Now, I know what you’re thinking. Replicas? Those cheap imitations, won’t they fall apart after a few months? No, they won’t. Hear me out. With today’s technology and attention to detail, it’s possible to get an Eames replica that’s nearly indistinguishable from the real deal. And let’s be honest, who’s really going to know the difference?

So, if you want the iconic design and comfort of an Eames chair without breaking the bank, a high-quality replica will have you lounging in style without emptying your wallet.

Authentic Eames: Is It More Than Just a Designer Label?

Well yes. As good as these replicas are, (and some of them are really good) not taking into account the label, (or lack thereof) an expert would be able to tell the difference.

But then again, that would be inevitable, given that the Eames chair and ottoman, (originally titled 670 and 671 respectively) are far from anything that could be considered ordinary items of furniture.

If you need further evidence to back up the claim, Charles and Ray’s first version of the Eames lounge chair and ottoman is in the permanent collection of the Museum of Modern Art in New York.

The Price of Owning a Piece of Furniture History

That may seem extravagant for a chair, but remember that Eames chairs hold their price exceptionally well. If you browse 1stdibs.com, for example, you can see what I’m talking about. They have a used/second-hand one, circa 2015, that is currently (at the time of writing) selling for £5,200.07.

They may seem like a pricey purchase at first, but these chairs hold their value and then some. Not only that, but they only get better with age.

In fact, they will look even better 20+ years from now – long after you would have worn out or gone off a furniture store chair. This makes the Eames lounge chair and ottoman a much more attractive option.

The original Eames lounge chair is made up of a number of key design elements, and I’ll list the main ones below.

If you decide to invest in an original Eames, you will be faced with the choice between going for a Vitra or a Herman Miller Eames chair. In case you are wondering, we’ll explain the difference between the two.

Herman Miller and Vitra Eames chairs are both authentic. That being said, there are some design differences.

Herman Miller was the original manufacturer of the chair. However, with a growing demand for the Eames chair overseas, Miller was faced with a decision. Should they extend their business overseas, or, authorize a select number of overseas companies to manufacture and distribute the chair instead? They chose the latter.

Of the few original companies selected, only one manufacturer remains – and that is the Swiss company Vitra.

It’s actually very easy to tell the two styles apart. Just as you’d expect, Herman Miller’s version of the chair is ever so slightly closer to the original 1956 design. You can easily spot the difference by looking at the base.

It’s really a matter of personal preference, but if you want that authentic 1956 look then the Herman Miller replicas will probably appeal to you more.

The Look You Love at a Fraction of the Price

If you are thinking of choosing a replica, the good news is that there are a number of high-quality Eames replicas out there, that are very faithful to the original Eames design specifications.

Don’t Be Fooled: Advice on Finding a Great Eames Reproduction

First of all, it really helps to know your Eames. If you know what design features an original Eames consists of, it will make it much easier to eliminate poor-quality reproductions.

We’ve listed the main design features in our “original Eames chair” section above, and referencing the list there, should really help you decide which Eames replicas are worth going for – and which to give a miss.

I’ll give you an example: The original Eames consists of three separate shells. Each shell consists of 7 sheets of layered plywood veneers.

The individual sheets are stacked on top of each other, (sandwich-like) in alternating glue-coated and none glue coated (dry) sheets.

The layers are then heated to just the right temperature. And precisely the right amount of pressure is applied to bend and mold the wood into the classic organic forms that the chair is famous for.

Now there are actually some replicas out there, that boast of “new improved 8-layers of plywood”. That, to me is a red flag, right there. I would question why they needed to use eight layers of plywood for a start – for me at any rate, that’s one I’d avoid.

Especially when you take into account that the original Eames chair was meticulously designed. A process that took Charles and Ray Eames many years and countless failed attempts before they were finally able to produce a prototype that was both functional and comfortable as well as aesthetically pleasing. The Eames chair made its debut in 1956.

Although there have been some refinements to the design over the decades, these have been the result of decisions made by expert furniture designers at Eames, as well as improved manufacturing techniques.

The most notable changes over the years have been:

I hope this guide has been helpful to you, let me know what you think in the comments below. 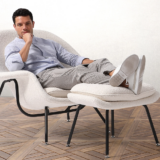 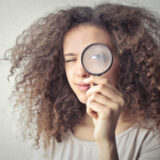 Neither Comfy Zen nor any of its employees shall be held liable for any harm to persons or property that results from use of the information described and/or contained herein.

All images on this website belong to their respective owners. If any graphic or image on this site is under your own copyright, then please contact us and we will remove it promptly.

Comfy Zen is a participant in the Amazon Services LLC Associates Program, an affiliate advertising program designed to provide a means for sites to earn advertising fees by advertising and linking to amazon.com.

We also participate in the Shareasale, Awin and Impact affiliate advertising programs, designed to provide a means for sites to earn advertising fees by advertising and linking to participating websites.